We are all in Marketing.

I know this blog is supposed to be about LabVIEW and automation, but if we’re honest, we are all in marketing. Whether you work for yourself as a consultant or if you work for an Alliance Partner or some large industrial company, you constantly need to market yourself. You can be the best and brightest LabVIEW developer, but if no one knows about you and knows what value you can bring, they won’t hire you. If you are a LabVIEW developer/architect it is worth knowing a little about marketing.

In the past year, I’ve read 3 different marketing books. Each one is different and yet I noticed some patterns between them. I’m recommending these 3 books because, quite frankly, I hate textbooks! A lot of nonfiction reads like a textbook, but these 3 books actually tell stories. They are filled with relevant and interesting examples. Even though they are about marketing, these books don’t tackle the subject directly but talk more about understanding human behavior, which makes them very interesting reads. They are actually page-turners. Each could easily be read in a couple sittings. Even if you aren’t into marketing, I still recommend these books.  They are very entertaining and insightful. 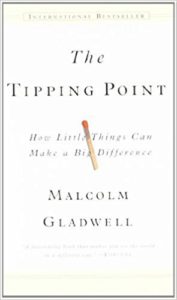 The most recent book I finished was “The Tipping Point” by Malcolm Gladwell. If you have read any of his other books, you will know that he likes to challenge the way we see the world. “The Tipping Point” does just that. “The Tipping Point” looks at and tries to explain sudden changes in society. He looks at crime in New York City, a syphilis outbreak in Baltimore, teen smoking, a rash of suicides in Micronesia, various fashion trends, and other social epidemics. He looks at them all through the lens of the medical field of epidemiology. In epidemiology, small changes can have huge disproportionate impacts, which leads to something called the tipping point.

As human beings, we tend to think of things in linear terms. If you want more output, then increase the input. In epidemiology, that just doesn’t hold true. At the tipping point, very small changes in inputs can dramatically affect the output. The challenge of the book is to change your thinking. If you want a big change in the output, don’t look for big changes in the input. Instead, think of small highly targeted changes that push you towards the tipping point. Gladwell lists 3 areas to focus on.

Through the book, Gladwell points to several cases that show how small changes in these 3 factors have lead to rather dramatic outcomes. 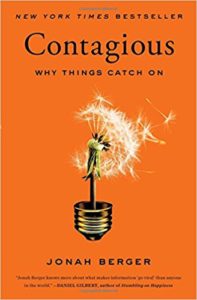 In “Contagious”, Jonah Berger looks at how ideas spread by word-of-mouth.  What causes one idea to spread and become contagious while another idea doesn’t.  He draws heavily from observation of social media as well as several scientific studies.  He comes up with the following reasons that ideas become contagious (note: they all deal with the idea itself).  If you can incorporate any of these attributes into your idea, it will be more likely to become contagious.

Berger pulls a bunch of examples from social media and pop culture as well as scientific studies to illustrate how all of these factors can affect how quickly an idea spreads via word of mouth.  If you were to compare this book to “Tipping Point”, I would say it is all about the stickiness of an idea.  All of these attributes can make the idea more sticky, and many of them are very minor changes so it fits with the theme of targeted small changes in the input causing much greater changes in the output.

The Power of Habit – Charles Duhigg 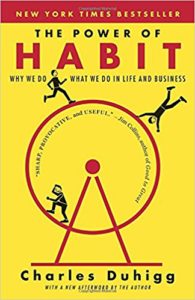 “The Power of Habit” is all about habits: those moments when we go on autopilot and do something without even thinking about it.  We all think of habits in terms of individuals, but Duhigg goes on to talk about habits at the organizational and even national/societal level.  The first couple of chapters describe exactly what habits are and how they work.  It describes the basic habit loop: Cue – Routine -Reward – Repeat.  As we are all aware habits can be both good and bad depending on exactly what we are doing while we are on autopilot.  So the book outlines how to change existing habits by changing out the routine and how to create new habits be creating cravings.  It then goes on to talk about how habits function within organizations and society.

What does any of this have to do with marketing?  I have to admit I didn’t buy this book to study marketing.  I was more interested in how to change some of my bad habits start some new good habits.  However, the book is littered with marketing examples.  One of the first examples in the book is about toothbrushing and how we all owe our toothbrushing habit to the marketing of Pepsodent.  Then there is an entire chapter devoted to Target and its attempts to use people’s habits to make predictions and market to them.

How does this link to the other books?   The whole habit loop gets started by a cue, which seems very similar to the idea of triggers from “Contagious”.  Then there is the whole idea of keystone habits, small habits that have a big impact.   Paul O’Neil changing the safety culture at Alcoa sounds similar to NY removing the graffiti from subway cars.  A small change in the environment, big change in results.  Also, it is very hard to read the chapter on Rosa Parks and the civil rights movement without thinking of her as one of the connectors in “Tipping Point”.  On that account, both books actually use the same language in talking about the “power of weak ties”.

All 3 of these books are just great books to read.  They will challenge your view of the world and hopefully give you some insight to help influence the world around.  That is basically the essence of marketing: influencing the world around you in order to get them to buy into your idea or product.